SHANGHAI -- Despite reassurances by the government, residents along China's rivers are increasingly worried that the mitigation capabilities of the Three Gorges Dam might fail after heavy rains lashed parts of the country.

Some 141 people are already missing or dead, and nearly 38 million people have been evacuated since alerts were triggered in June about the flooding of 433 rivers nationwide, the country's flood control authorities said on Monday.


Authorities in Jiangxi, the province through which the Yangtze River flows and which is home to Poyang, raised its flood-control response to Level 1 on Sunday, the highest of a four-level emergency response.

Torrential rains that typically hit in July and August started in the middle of June this year. Video clips on social media showed rivers overflowing and submerging homes, including a three-story home in Jiangxi that collapsed and was swept away by strong currents on July 5.

Economic losses from damage to properties in 13 provinces had reached 25.7 billion yuan ($3.6 billion) by the end of June, according to an estimate by PingAn Securities. Continued flooding is expected to drag down investment in the third quarter but unlikely to affect economic output as a whole, it said.

Residents in affected areas appeared to be more concerned that the Three Gorges Dam would breach its banks with further downpours, even though authorities had released floodwater from the dam upstream on June 29.

In one video posted by a resident in Wuhan on Friday on the Toutiao Jinri news app, Yangtze River's water level reached 28.11 meters, well above the average, even though there had been no rain in the city in recent days. Wuhan is one of the cities in the Yangtze River basin, south of the Three Gorges dam.

Dam authorities tried to reassure residents by saying in state media on July 8 that the reservoir could still hold more rain as it had only reached 149 meters of a maximum of 175 meters that it can contain.

Like others, Zhang Jianping, an activist in Jiangsu, is skeptical.

"With hindsight, I think that all those experts who opposed the buildings of the Three Gorges were right," Zhang said on Radio Free Asia. "Since it was built, it has never played a role in preventing flooding or droughts, like we thought it would back then."

Despite protests by residents and environmentalists, the Three Gorges Dam was completed in 2006 after a 12-year build. Millions were displaced as an area of about 600 kilometers was submerged to create the world's largest dam and hydroelectricity facilities. 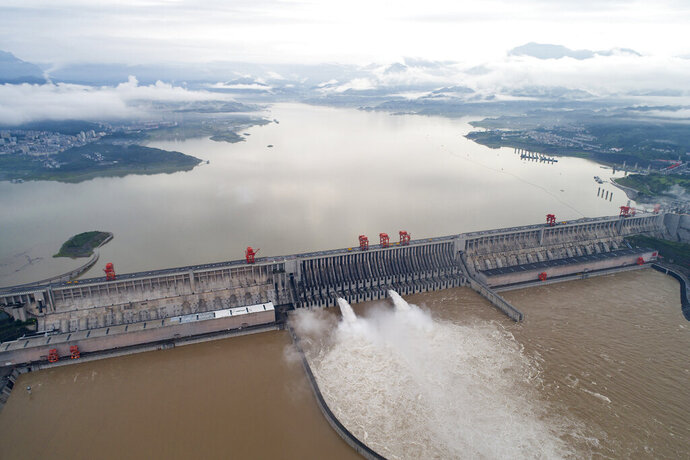 BEIJING (AP) — Authorities in central China blasted a dam Sunday to release surging waters behind it amid widespread flooding across the country that has claimed scores of lives. State broadcaster CCTV reported the dam…

EIJING (AP) — Authorities in central China blasted a dam Sunday to release surging waters behind it amid widespread flooding across the country that has claimed scores of lives.

State broadcaster CCTV reported the dam on the Chuhe River in Anhui province was destroyed with explosives early Sunday morning, after which the water level was expected to drop by 70 centimeters (more than 2 feet).

Water levels on many rivers, including the mighty Yangtze, have been unusually high this year because of torrential rains.

Blasting dams and embankments to discharge water was an extreme response employed during China’s worst floods in recent years in 1998, when more than 2,000 people died and almost 3 million homes were destroyed.

Last week, the gargantuan Three Gorges Dam on the Yangtze opened three floodgates as the water level behind the massive dam rose more than 15 meters (50 feet) above flood level. Another flood crest is expected to arrive at the dam on Tuesday.

Elsewhere, soldiers and workers have been testing the strength of embankments and shoring them up with sandbags and rocks. On Saturday, firefighters and others finished filling in a 188-meter (620-foot) break on Poyang Lake, China’s largest freshwater lake, that had caused widespread flooding across 15 villages and agricultural fields in Jiangxi province. More than 14,000 people were evacuated.

Seasonal flooding strikes large parts of China annually, especially in its central and southern regions, but has been especially severe this summer. More than 150 people have died or are missing in flooding and landslides brought on by the torrential rains — 23 of them since Thursday alone.

About 1.8 million people have been evacuated and direct losses attributed to flooding are estimated at more than 49 billion yuan ($7 billion), according to the Ministry of Emergency Management.

Major cities have been spared so far, but concern has risen over Wuhan and other downstream metropolises that are home to tens of millions of people.

but climate change is not real. LOL
O

DarkNoon said:
but climate change is not real. LOL
Click to expand...

Of course the changing, always has.

The flooding in China isnt because of rains that haven’t occurred before. They built it to control rains like this.
It’s because of a poorly designed flood control system. It’s ten years old and already having sedimentation problems. They built the largest dam in the world, against the advice of everyone, in a region with active fault lines and relatively significant recent earthquake activity.
The foundation of the three gourges dam isn’t even set on bedrock. The alluvial deposit are so deep I suppose they couldn’t or didn’t want to excavate to bedrock so they
constructed it with their own manmade bedrock of giant blocks of stone. Stones which the chines engineers have had to admitted are moving slightly every year.
That and they built this upstream of 400 million people.
Another tragic environmental disastergiven to us by communism just like the USSR turning the Aral Sea in to a Dried up puddle.

Sounds like dams in China are starting to burst.

Shmooglavoue said:
Sounds like dams in China are starting to burst.

Well poor management, sprinkled with climate change is a tragic disaster waiting to unfold. The untold tens of millions there will have to suffer. Sad.