Secretary of State Blinken tells ABC about 300 Americans remain in Afghanistan who “want to leave” ahead of Biden’s Aug. 31 deadline for U.S. forces to completely withdraw.


Shame on U.S Biden administration if they don't safely get the rest out​

6 Civilian Casualties. 4 of them Children in Second Airstrike on ISIS-K by US Drone.
A

The U.S. military shot down rockets aimed at the Kabul airport on Monday morning as violence near the field threatened efforts by the United States to meet Tuesday’s deadline to withdraw from Afghanistan and end America’s longest war.
A U.S. official said the rockets were brought down by a counter-rocket system after five were fired at the airport, and that there were no initial reports of casualties. The airport remained open, according to the official, who spoke on condition of anonymity to discuss sensitive operational details.
https://www.nytimes.com/2021/08/30/world/us-rockets-kabul-airport.html.
Click to expand...

9 family members killed after US strike in residential area of Kabul, eyewitnesses say​

Nine members of one family were killed in a US drone strike targeting a vehicle in a residential neighborhood of Kabul, according to a relative of those killed.
Those killed included six children, the youngest being a 2-year-old girl, the brother of one of the dead told a local journalist working with CNN.
He said the people killed were his brother Zamaray (40 years old), Naseer (30), Zameer (20), Faisal (10), Farzad (9), Armin (4), Benyamin (3), Ayat (2) and Sumaya (2). 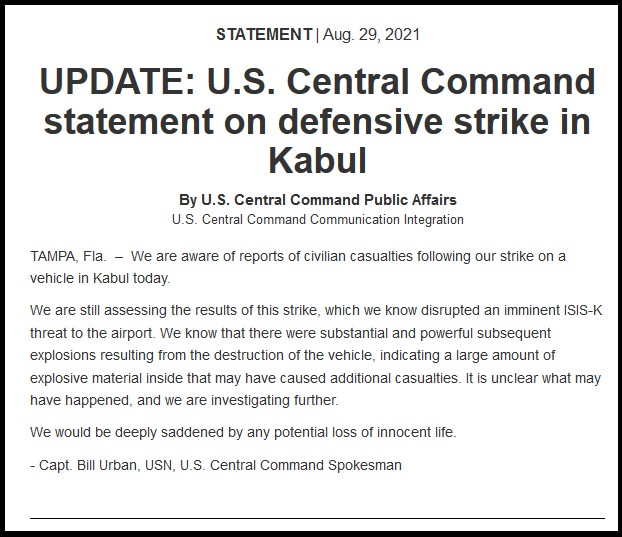 US is now completely withdrawal from Afghanistan, live coverage:
Officially no more troops in Afghanistan.
D

But will the drone war continue?

Just 24 hours before a suicide bomber detonated an explosive outside Hamid Karzai International Airport, senior military leaders gathered for the Pentagon’s daily morning update on the deteriorating situation in Afghanistan. During the meeting, Gen. Mark Milley, the chair of the Joint Chiefs of Staff, warned of “significant” intelligence indicating that the Islamic State’s Afghanistan affiliate, ISIS-K, was planning a “complex attack,” the notes quoted him as saying.

Commanders calling in from Kabul relayed that the Abbey Gate, where American citizens had been told to gather in order to gain entrance to the airport, was “highest risk,” and detailed their plans to protect the airport.

“I don’t believe people get the incredible amount of risk on the ground,” Austin said, according to the classified notes.
On a separate call at 4 that afternoon, or 12:30 a.m. on Thursday in Kabul, the commanders detailed a plan to close Abbey Gate by Thursday afternoon Kabul time. But the Americans decided to keep the gate open longer than they wanted in order to allow their British allies, who had accelerated their withdrawal timeline, to continue evacuating their personnel, based at the nearby Baron Hotel.

To report on Afghanistan please continue on here:

This thread is the continuation of the collape of Afghanistan thread. Its officially over and a new month so made a new thread.