So if I am understanding this projection correctly, as an example, Alabama will peak on April 18 but their peak won't end until May 30?

- 51 recovered #COVID19 patients in South Korea have tested positive AGAIN, amid fears that the coronavirus can hide in human cells and reactivate.

I knew it that's been my theory on the common cold and corona virus in general. You only ever catch it once and it lays dormant in the body until the right conditions , to become active again. Meantime pharmaceutical companies and doctors make a fortune by not releasing the truth.

A useful thing to know from this study would be how big a group do these 51 patients come from. If it’s 51 out of 1500 cases it very well could be an anomaly. If 51 out of 153 it’s much more concerning.
I’m having a hard time thou accepting all these epidemiologist defending or excusing results with a 30% failure rate.
I’m sorry that’s such an unacceptable standard it calls into question there usefulness and no one with a public voice is calling BS.
Think about it these are people who have been confirmed and quarantined for 14 days or more many hospitalized. You would think when testing someone leaving hospitalization great care would be made to get a viable sample and insure a accurate test.
Test are good but not all test can be trusted
Yet we’re supposed to pine for clinics rushing people through to test 1000’s of people.

If they can dismiss reports of doctors indicating something unpleasant with “testing validity” argument then all testing results being done right now are void as well.

This is the initial reporting on the assertion of “reactivation” of the virus from Yonhap.

KCDC Director-General Jeong Eun-kyeong said the virus was highly likely to have been reactivated, instead of the people being reinfected, as they tested positive again in a relatively short time after being released from quarantine

To me personally the choice of the word “reactivated” does not imply faulty testing but dormancy, this is from the Director of the KCDC.
W

Sunshine said:
So if I am understanding this projection correctly, as an example, Alabama will peak on April 18 but their peak won't end until May 30?
Click to expand...

I'm sorry- I should have been more specific. I'm so used to communicating with my colleagues. So after the epidemic peaks, it enters the "deceleration" phase, where the number of new cases each day begins to decline. Our models are showing that the deceleration phase will end around May 30 for Alabama. After that point, there may continue to be some sporadic cases, but sustained community transmission will have ended at this point.

I do wish to stress that at this time, it is unknown if there will be continued waves of infection throughout this pandemic. Hopefully, with increased testing, social distancing, and isolation, we should be able to get this pandemic under control. However, we will continue to remain vigilant for another possible wave of infections.
W

Obreid said:
This is the initial reporting on the assertion of “reactivation” of the virus from Yonhap.

KCDC Director-General Jeong Eun-kyeong said the virus was highly likely to have been reactivated, instead of the people being reinfected, as they tested positive again in a relatively short time after being released from quarantine

To me personally the choice of the word “reactivated” does not imply faulty testing but dormancy, this is from the Director of the KCDC.
Click to expand...

That is correct- there is some evidence that in a portion of cases, they end up going through a period of time where they relapse, and the infection begins to worsen after improving. At this time, it appears that the cases in question were from people who hadn't quite cleared the initial infection. It is also important to note that in all of these cases, they had tested positive again within a few days- not several weeks. It is also unknown at this time how much virus they were shedding when they were in the dormant period. There is definitely much that remains to be studied about this virus.
W

The following list shows the projected timeframe for COVID-19 peak by state, with estimated end of peak and severity. These new models, yet again, are mostly trending in the right direction. Almost every state has flattened the curve. Texas wins the award for most improved today- seriously, I cannot stress enough how much the situation in the Lone Star State has improved. Sorry, New Jersey and Rhode Island- you guys got worse! You still have time to beat this, though! Also, Tennessee continues to stick out to me- they turned a potential tragedy around and seriously flattened the curve. Well done, Volunteers!

Just to clarify- the date of peak infections signifies when the highest number of daily infections will be reported. Afterwards, each state will enter the deceleration phase of the epidemic, with sporadic cases appearing after the "end" date. I am also happy to report that my home state of Michigan has peaked as well!

willrod1989 said:
I also recently heard from my brother back in Michigan. He was infected with COVID-19, but so far appears to be making a decent recovery. It has definitely taken a major toll on him! So far, his girlfriend hasn't been showing any symptoms- and he's been keeping his face covered whenever she comes anywhere nearby- as well as keeping the window open for ventilation.
Click to expand...

I hope for a speedy recovery of your brother. It does take a toll on you that is hard to describe. I am still recovering from it.

Staff member
Another U.S. aircraft carrier has confirmed a case of coronavirus in a crew member, according to a news report.

Citing three U.S. defense officials, Politico reported Tuesday that a sailor on board the carrier Nimitz (CVN 68) has tested positive for COVID-19. The sailor’s test came back positive last week after the individual exhibited symptoms on board, Politico said.

Another crew member also has coronavirus, but the member has not been working on the carrier, Politico said.

A U.S. defense official told Military.com on Tuesday that a Nimitz-based sailor, who displayed symptoms was placed into isolation in late March out of an abundance of caution, was tested twice in recent days. However, both tests came back inconclusive. It was not immediately clear if the latest case is the same sailor.

The carrier is the fourth to report a case of the highly contagious disease among its crew.

The nuclear-powered aircraft carrier, based in Bremerton, Washington, has been readying for a deployment, Politico reported. The Nimitz strike group is part of the U.S. 3rd Fleet, which coordinates with U.S. 7th Fleet to conduct missions throughout the Pacific.

A request for comment from 3rd Fleet was not immediately returned.

Y'all can keep believing in the bogus false hope. But anyone smart should know any predictions are wrong and impossible to know.

The peak will happen but not when we say it will. We don't dictate what this virus does or do.

The lack of testing, the lack of truth from countries, the EXTREME lack of competence in this crisis and you wana believe these models/perditions, fine be a drone.

Not saying that it will be a long time before the peaks but on the contrary it could end very sooner than thought or it could last a very long time we just won't know until it happens is my point and people and governments need to stop acting like they know cause in the end no one truly knows jack shit.
Last edited: Apr 8, 2020
S

willrod1989 said:
Just to clarify- the date of peak infections signifies when the highest number of daily infections will be reported. Afterwards, each state will enter the deceleration phase of the epidemic, with sporadic cases appearing after the "end" date. I am also happy to report that my home state of Michigan has peaked as well!
Click to expand...

Thank you for the great explanation.

This is a phylogenetic network of SARS-CoV-2 genomes sampled from across the world. These genomes are closely related and under evolutionary selection in their human hosts, sometimes with parallel evolution events, that is, the same virus mutation emerges in two different human hosts. This makes... 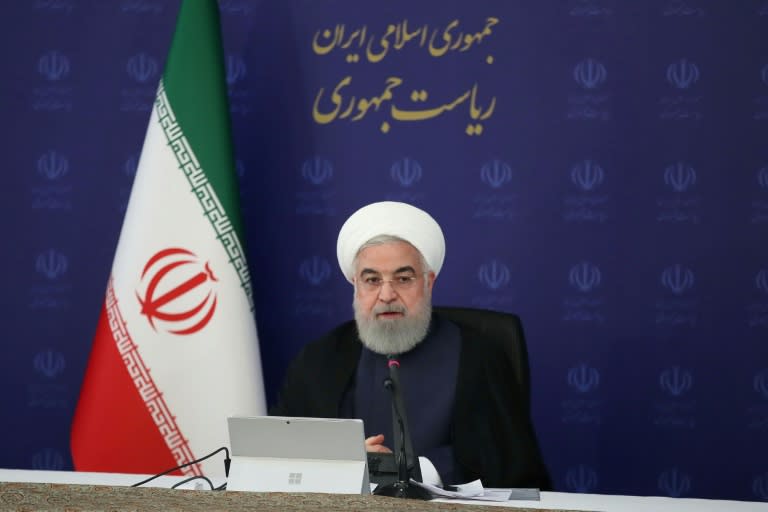 Iran's President Hassan Rouhani appealed to the International Monetary Fund Wednesday to approve a $5 billion emergency loan request to combat its novel coronavirus outbreak. "I urge all international organisations to fulfil their duties," Rouhani said during a cabinet meeting. "

The link is to a Epoch times report on the origins of the Wuhan virus. About 60 min long and not a one person diatribe but a investigation of the virus origins based on interviews of virologist and academic postings made regarding research of Corona viruses both inside and out of China

KimPossible said:
But anyone smart should know any predictions are wrong and impossible to know.
Click to expand...

Predictions are just hypothesis based on the available data. Of course, we don't "know". No one can ever "know" the future. But we can make educated guesses based on data, biology, history, etc.
O

As we known , there are currently 5 Aircraft carriers with corona-infections. Will this become a serious thread in the near future?

As France Aircraft-Carrier Charles de Gaulle is also possible infected , it seems like the western gets weakened.

Meanwhile the easing of measures in germany is discussed. Chancellor A.M. said its not the point to discuss about this , its to early to do that. But some fed. states here want to going its own way. Guess there will come a second Wave , fast , hard , effective.

In my opinion its also the absolute wrong time to easing the measures. If we do it now , the next wave will hit us harder as the basic number of infected people is now way higher. But i´m Proud of a big part of my community, that will keep the measures on , as long as they can . Many people want to follow the measures for a way longer time to avoid a next wave. Its just sad , that not all will try to do this.

Greetings from Germany , and Stay healthy or get well if already infected. Best wishes

We can't make models on past events because this is the first of it's kind of this scale in modern history.

The data is very inaccurate due to extreme lack of testing.

Lastly this Coronavirus can't be compared either to previous Coronavirus outbreaks biologically it seems, otherwise I would think we would have a further understanding of the virus and what to do.

Yes perditions are just that, a guess. But I'm saying there really is no predicting this, there not guessing, there just throwing very inaccurate numbers and dates out there based of gross calculation.

Bottom line of my'n is I wouldn't put one shred of hope or trust into any numbers or dates given to us for awhile.

KimPossible said:
The data is very inaccurate due to extreme lack of testing.
Click to expand...

I can't stress this enough as well. Even tho testing is ramping up in each of the states it will be some time before we see any kind of reliable data.