This diagram shows that the MU Coronavirus variant is most effective
in neutralizing antibodies formed by the the body and the mRNA vaccine.
It could cause more reinfections, vaccine breakthroughs and more severe illness. 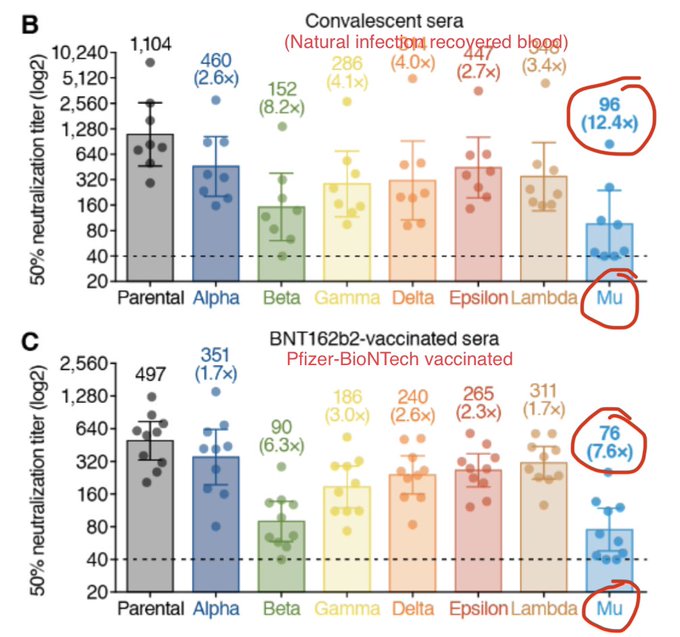 Now I don’t really need the source I trust That you do have a source for this figure
But if you don’t mind what’s the source I’d like to review it.

Obreid said:
Now I don’t really need the source I trust That you do have a source for this figure
But if you don’t mind what’s the source I’d like to review it.
Click to expand...

It was on my local NPR radio station this morning. This doesn't mention the 47,000 directly, but the math adds up. 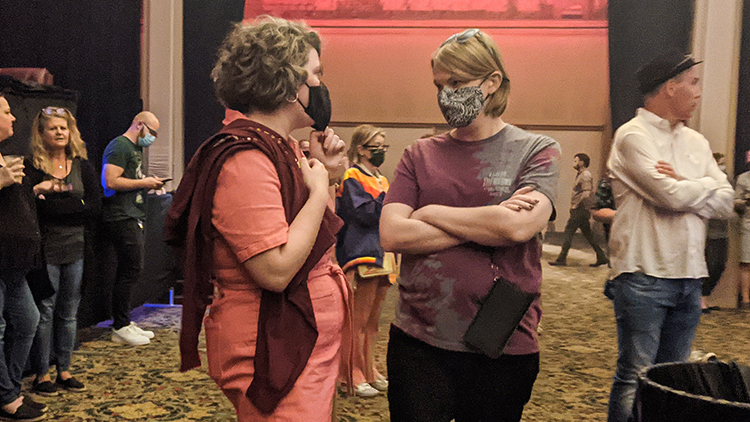 Infections among children have increased nearly 240% or make up 29% of all US Covid cases, pediatricians group says: 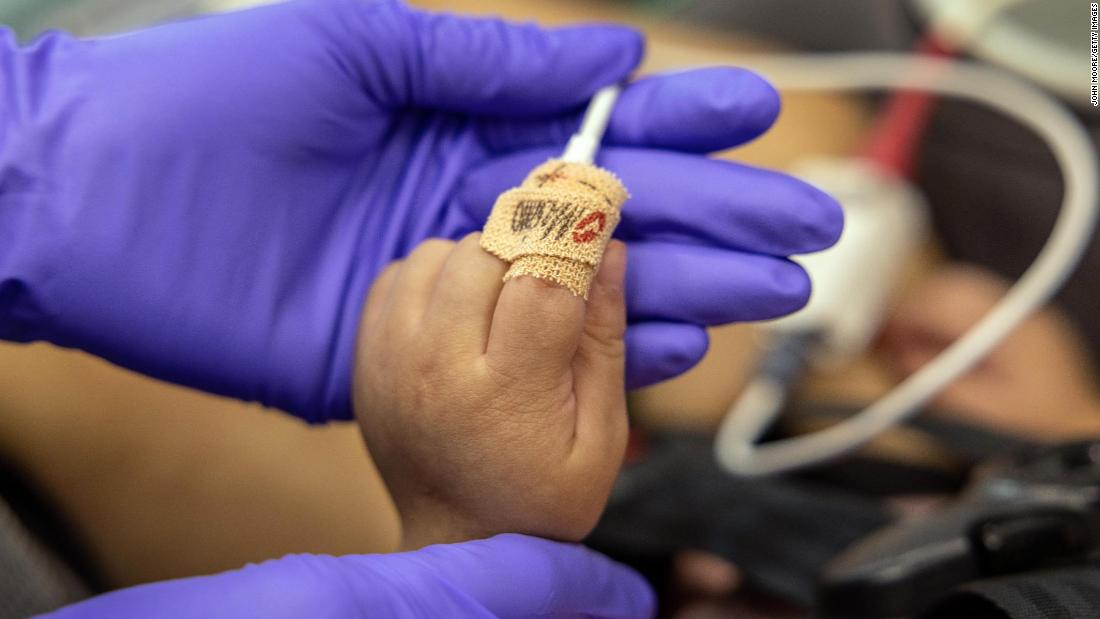 COVID-19 vaccines could be approved for kids 5-11 by end of October: 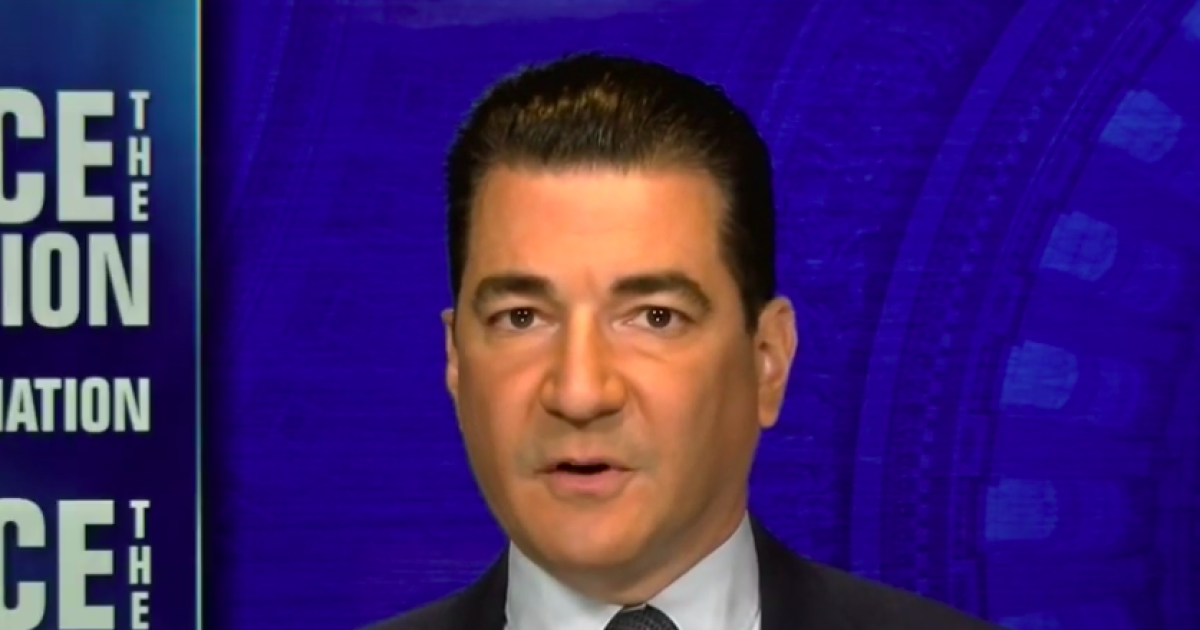 Dr. Scott Gottlieb, the former FDA commissioner, said for skeptical parents, getting their children vaccinated against COVID-19 is not a "binary decision."

DarkNoon said:
Biden to announce that all federal workers must be vaccinated, with no option for testing:

The details of President Biden's six-prong plan to fight COVID-19 are unclear, but a White House official says they will include vaccine and mask requirements.

Get vaccinated or be fired and good luck finding another job that won't do that too in time. Note no one can collect unemployment if you are fired & obtain a job without a vaccine will be a no go too, not just preexisting jobs.

This is a business best interest and prerogative to do so. Basically get vaccinated or don't be apart of society.
Click to expand...

Yeah and nobody can see any problems with that.

no such thing as a democracy- choice. This is discrimination at its best. Gone from three class's in society to two.

Yingyang said:
Yeah and nobody can see any problems with that.

no such thing as a democracy- choice. This is discrimination at its best. Gone from three class's in society to two.

Your in Western. Australia correct, is it as nuts their as eastern Australia?

Obreid said:
Your in Western. Australia correct, is it as nuts their as eastern Australia?
Click to expand...

Not at all close. But it will catch up soon I'm sure. My biggest issue is freedom and choice being taken away from people. In my history children were always the first to be vaccinated. Because governments don't have the power to force vaccine they have created laws- rules to divide society and discriminate against anyone who wants choice. I know a American-Italian family here who's blood type can't receive the vaccines and due to government power soon won't be able to work,receive carers pension, go out for entertainment, dinner etc etc. Eventually being social outcasts. People should have choices surely unvaccinated people are not a danger to vaccinated so 80% of vaccinated population should not be judging 20% of unvaccinated people and treating them like social outcasts. I choose not to be vaccinated as an adult. As a child I received several vaccinations. But its wrong to remove freedom and choice and judge those that don't want it . They are already risking their own lives but not the lives of the vaccinated. Why make harder by taking away the rights to live normally. Eg. Freedom,employment, entertainment, jobs -unemployment benefits- pensions etc etc. Democracy is history. We throw judgement against other countries for the actions that our governments are now following. If you look back at my reaction at the start of this I shit myself watching people dropping in the streets China, Iran, Italy and south Korea. Now these vaccines have only recently been introduced. Honestly if this was as serious as the first 2-3 months of people collapsing in the streets like they the mainstream media showed than why did that suddenly stop happening globally even though hardly any population had vaccinated. Surely we should have and still be seeing people collapsing in the streets globally not just the first 4 countries.??????????? Now in Perth Western Australia we can have 60,000 people at a football grand final but not aloud to have Anzac day.? No for the and our government claims it all contradicts itself to much ??? Even in Europe vaccinated people protest with unvaccinated for Freedoms and Rights. They can see this is discriminate. Globally doctors, nurses, miners, military, workers of all descriptions are walking of the job or being made redundant due to vaccine.

At this stage previous vaccines had 7 years of testing for long-term effects and effectiveness. Suddenly none of that was ever necessary.? Now the global population is more than happy to be guinea pigs. And medical community is free from any issues that arise from lack testing and possible outcomes. Not mention most of any population have no idea of underlying health issues that they the government says can be effected by vaccines. You don't know your immune compromised with cancer until your diagnosed. That's one example. So the question remains do people get tested for cancer before being vaccinated? No they don't. Do people get tested before the vaccine to see if they are prone to blood clotting? No they don't. Yeah we are warned that 1 in a million might - might have a serious reaction or potential death to vaccines. Unless the individual gets tests for possible complications first you roll the dice and hope your a winner. The chances your not a loser are so incredibly high just do it. Because if you don't take your life into your own hands the government will make sure you suffer with or without covid 19 . Unfortunately people forget history. Even the French. Your countries have endured revolutions -civil wars . Why? What a waste of time and lives globally when we all should just do as we are told and the world will be a better place. Normally each to their own but even this is not acceptable any more?
D

You don't see the dead people in the streets because they die at home (or in the hospital) when they become sick and they don't want to infect others.
Read the obituaries in the newspaper, only a few place an obituary there at all. So many die before their time and certainly not from vaccination.
Corona isn't as deadly now like it was new as before when nobody had an idea how to treat it but the less deadly it is now the more contagious it became.
The Corona variants of today are infecting more people instead of just killing 25% of them, they kill only 2.5%.
But instead of 100 people the Delta variant infects 1000 and so the same amount if people is still dying.
Also it only isn't as deadly as long as the health system doesn't collapse. Without oxygen, antibodies etc people would die on the streets again.
Yes, many survive Corona because of the good health care, but their health can be permanently damaged.
I don't see as many deaths from the vaccine as with Covid-19.
And the "Long Covid" could be the real the killer, we'll find out later.

Covid: The unvaccinated patients in intensive care - some people that regret for not taking the vaccine (just some examples)​

China's view of handling the Coronavirus in the West.

DucknCover:
I normally issue warnings privately so as not to embarrass a member in the public forum, but since you are posting as an unregistered guest I do not have that option.

Once content you have posted has been deleted by a moderator for being conspiracy theory, you do not re-post it. This is the last time I am going to remind you that this is not a conspiracy theory board.

Do that again, and I'll see to it that none of your posts are approved in the future.

DucknCover said:
China's view of handling the Coronavirus in the West.
Click to expand...

China's position is laughable. The entire world knows they are covering up Covid deaths.

The only group that believes thier counts is the WHO. "No evidence of community transmission" did not age well for them.

That is absolutely true. But they lock down an entire city at the first sign of an outbreak in order to contain it. They shut down a major shipping port due to a single dockworker testing positive. Which brings two questions to my mind:

1: What do they know about the virus that we still don't, apparently?
2: Why are other countries not following the same principle of relatively small, isolated lockdowns rather than just letting it burn uncontrolled?

By the way, this latest outbreak in China is suposedly the Delta variant brought into the country by a Chinese citizen coming from Singapore. He was quarantined for three weeks upon arrival and repeatedly tested negative for Covid, but still developed an infection a week after being released from quarantine. Possible indication of a new, longer incubation period. 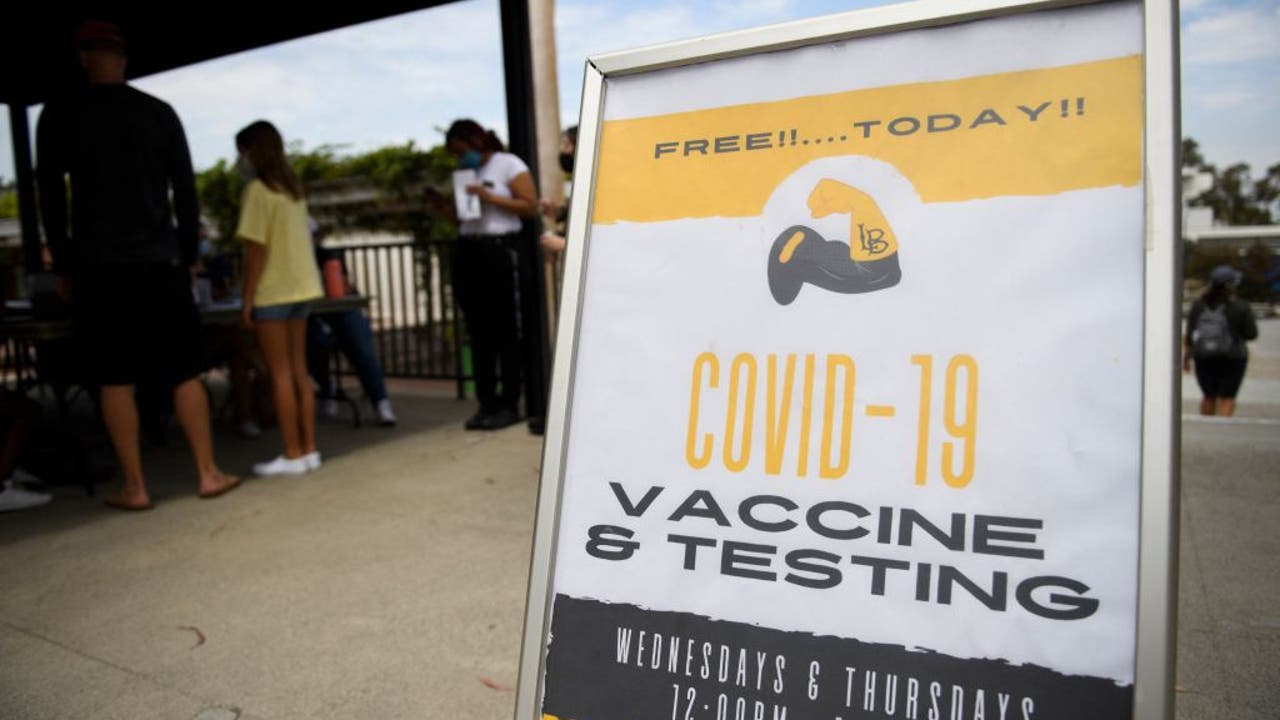 One in every 500 Americans has died of COVID-19, according to data from the U.S. Census Bureau and Johns Hopkins University. 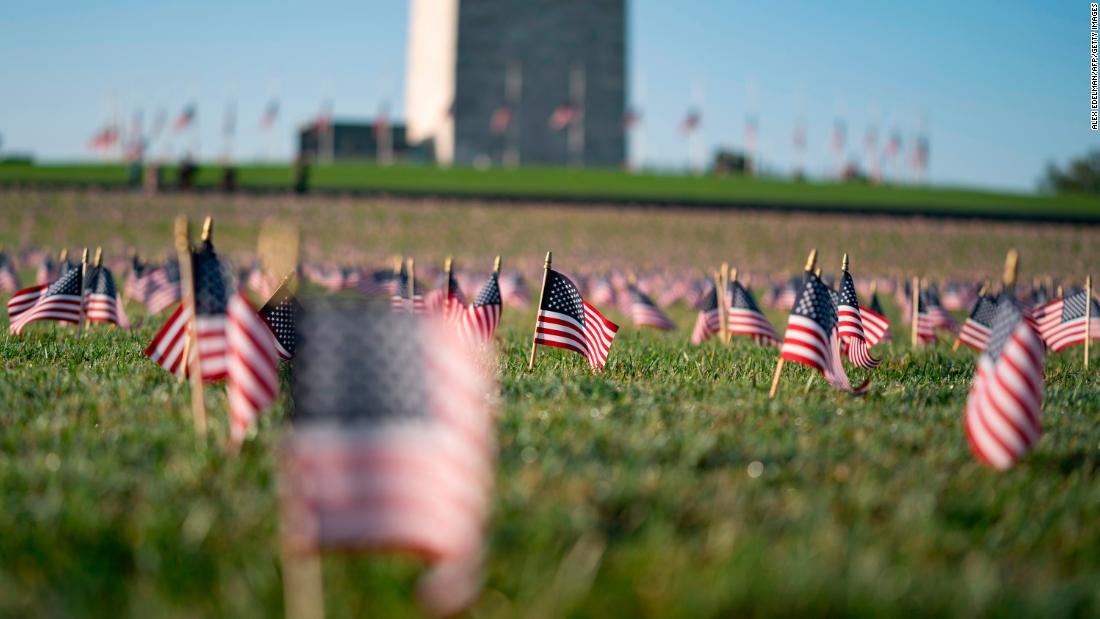 The United States has reached another grim milestone in its fight against the devastating Covid-19 pandemic: 1 in 500 Americans have died from coronavirus since the nation's first reported infection.

Remember that those stats are misleading. People have been counted as dying from Covid when Covid was not the cause. All they had to do was have the virus and they were counted, regardless of whether or not it was the actual or proximal cause of death.

DEFCON Warning System said:
Remember that those stats are misleading.
Click to expand...

It's true stats are inaccurate as the figures are to low. It is misleading as many more have died from covid than what has been counted. Infectious disease professionals think the death toll is considerably higher than what it actually is especially the number of cases not just deaths.
Last edited: Sep 15, 2021

DarkNoon said:
It is misleading as many more have died from covid than what has been counted.
Click to expand...

Well...almost all deaths in the US are recorded. Unless they dropped dead someone in the Bayou, the government knows.


DarkNoon said:
Infectious disease professionals think the death toll is considerably higher than what it actually is especially the number of cases not just deaths.
Click to expand...