A study published by China’s Center for Disease Control in September reported several mutations in two cases of H5N6 and described the spread of the virus as a “serious threat” to the poultry industry and human health.

“The increasing trend of human infection with avian influenza virus has become an important public health issue that cannot be ignored,” the researchers said.

On Thursday, a report from the European CDC expressed concern about the detection of H5N6 viruses with markers for mammal adaptation. “The additional reports of transmission events to mammals, e.g. seals and a fox as well as seroepidemiological evidence of transmission to wild boar, could indicate evolutionary processes, including mammal adaptation with the possibility to acquire the ability to transmit to humans,” the report said.

The World Health Organization (WHO) says increased surveillance is urgently required to better understand what’s behind a recent spike in human cases of H5N6 bird flu in mainland China. Only 48 people have been infected with H5N6 bird flu since the first confirmed case in 2014, but a third of...

I guess forcing the birds to eat editable vaccines is out of the question? No let's keep pumping the people full of mystery drugs.

Let's never forget what Bill Gates said many years ago at a Ted Talks forum.

I deleted the clade numbers to make the the most important passages easier to read.


(H5N6/H5N8) viruses gained attention because of their rapid evolution and global spread.

Detection of H5N6 in cats, pigs, and humans has also been reported.


In February 2021, the Russian Federation reported detecting 7 cases of asymptomatic human infection with H5N8 viruses in poultry farm workers, linked to a poultry outbreak However, a serologic study revealed the presence of antibodies to an H5N8 virus in 61 of 760 serum samples from persons who had had contact with infected or deceased birds during the 2016–17 outbreaks in Russia, providing evidence of overlooked human infection.

A few studies have also indicated efficient replication of H5N6 virus in human bronchus and lung explants and in primary human bronchial epithelial cells, which might have been linked to their respective successful infection of humans and direct-contact transmission...

.... high fatality rate of H5N6 infection in humans and the high cytokine/chemokine levels in the serum of some patients infected with H5N6, which are comparable to those infected with H5N1

The persistent circulation of H5N6/H5N8 viruses among avian populations and periodic infection of human hosts enable ongoing evolution of the viruses with the possibility of acquiring better transmissibility, higher pathogenicity, or both, in humans. Therefore, education, vaccine development, surveillance, and risk assessment surrounding these viruses should continue.

H5N1 hightly pathogenic avian influenza A virus = lethality is 100% (humans and birds)
H5N1 virus has been regarded to be the world's largest pandemic threat,
and billions of dollars are being spent researching H5N1 and preparing for a potential influenza pandemic.

could be related to
Russia - "A mysterious suspected ‘bird flu’ is feared to have wiped out thousands of seabirds.
Scientists are urgently investigating the cause of up to 7,000 deaths of black-necked grebes, sea doves, and gulls."

The bird flu has made a return, cropping up around Europe and Asia in recent weeks.
Several outbreaks of severe bird flu in Europe and Asia have been reported in recent days to the World Organization for Animal Health (OIE), in a sign the virus is spreading quickly again.
The spread of highly pathogenic avian influenza, commonly called bird flu, has put the poultry industry on alert, hoping to control the spread.
An outbreak among poultry could lead to millions of bird needing to be culled, which would prove to be a financial nightmare for the industry.

The U.S. Centers for Disease Control and Prevention warns that a person can contract the virus by being around or touching an infected bird.
If virus particles get into a person's eyes, nose or mouth they could be infected.
An infected bird will often spread infected droplets or dust through the air as they flap their wings, scratch or shake their heads.
A person who keeps poultry on their farm or in their backyard is advised to monitor their poultry for potential signs of the avian flu.

The bird flu is extremely deadly in humans, with a believed death rate of over 50 percent. 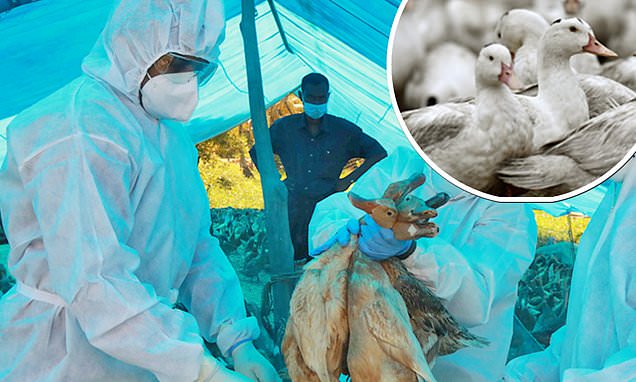 The 'bird flu' is spreading across Europe and Asia

Bird flu is beginning to spread across Asia and Europe, having been detected among poultry in at least six nations.The virus has a mortality rate of above 50 percent in infected humans.