Poll: Do you agree with DEFCON's analysis of the current Ukraine situation?

The DEFCON Warning System believes the current Ukraine situation will remain a local issue and that Western powers will not get directly involved.

Do you agree with this assessment?
J

The risk of nuclear is zero.

Good grief, no one is in the ball game except Ukraine and Russia. Ukraine ain't got nukes and Russia absolutely doesn't need to use nukes to take anything it wants from Ukraine.

At this time and near future, I agree with DEFCON Warning System and the condition green 5. Fate is fickle and time will tell if the situation will change. Look at how many situations happened in 2020 and people thought the end of the world was nigh. How many times did people gripe that DEFCON Warning System was wrong in their assessment of the event.

By the way, how many "friends / allies" will the United States of America abandon? America has pissed off a lot of the world and one day karma will come calling. I just hope she has a best friend left at that time.
J

I have been following this suatitition for the last several months. Ukraine is not only trying to take back the Donbas, but Crimea as well. Crimea is now Russian Territory as far as the Russian Federation is concerned. Russia has stated it will counter attack if Ukraine attacks Crimea. Russian Forces are already in place to take Kiev and several other provinces the minute war breaks out.

The wildcard is NATO, while not involved directly they are supplying Ukraine form behind the scenes, supplying arms, munitions and advisers/trainers.

Only time will tell what happens.

Jean-Pierre Cormier said:
The risk of nuclear is zero.
Click to expand...

The risk of a nuclear war is absolutely *never* zero, even in so-called peace time. There have been too many times we've almost initiated a nuclear war by accident to make that claim. As long as nuclear weapons exist, the odds of them being used are not zero.
O

The current tension is nothing unusual ... tensions exists everytime and in time of mass media there is always a huge push of a "normal" Situation.

the current Tensions in Ukraine wont raise yet the nuclear danger , the danger is still the same so there is no reason to raise the Level but i guess more monitoring is ongoing on the whole Situation.

D4 means an overwatch of unclear troop or ununsual (even non-millitary) movements or actions in/to/from tensioned areas with nuclear conflict-potencial to USA or US-Troops, because it can be something serious , but it can also be just a joke. Also a low or medium usage of conventional weapons could be possible. Story around Soleimani was a Situation , were D4 was clearly announced on NORAD.

If i look back on Movies like "Condition Red" or "War Games" :

D4 was always called as a direct possible confrontation of US with another nuclear force, while Ukraine is more like a proxy-Situation currently. Yes , it could change but D4 is overreact for given high obstacles.

in Condition Red it was an unidentified flying object from Turkey with direction to Russia and then a "higher" monitoring started , because of an unclear, unusual Movement against a tensioned Area.

in War Games , D4 started , as Russia Bombers and Nukes were shown , but were confirmed as " false alert"

D4 is more like a security-Level, check on serious movements before serious action is taken. Prepare for a rising danger of nuclear attack but try to avoid.

So definitely nothing that fits in the Ukraine-Situation yet.

But at least : i´m not an expert by far , so i could be absolutely wrong.
D

Nuclear war is possible. At least USA, UK and Turkey are involved, they all belong to NATO. And at least 2 of them own nukes.
I had voted for ->


No - Ukraine has potential to erupt into a nuclear war​

Personally Defcon 4 at minimum is warranted for this situation. This shows that you are watching the situation, and allows for the less informed to know there is a potential, however small, for things to go big. I would go as far as saying Defcon 3 is needed. This is due to observing the entire area, including naval and airspace reports. Currently there is a largish presence of Russian and NATO naval assets in the Black Sea. I also saw reports of at least one USA carrier. The Eisenhower CSG is currently in the Mediterranean. There has also been an uptick of interceptions of Russian aircraft. The amount of Russian assets moving towards the region is more than what's needed to annex the area. Taking that along with everything else, the situation is quite capable of going bad.

Then there is other situations, like the situation in the South China Sea. China is becoming more and more aggressive. So there is more than just one area to watch. And more than one area that could spark without much warning. 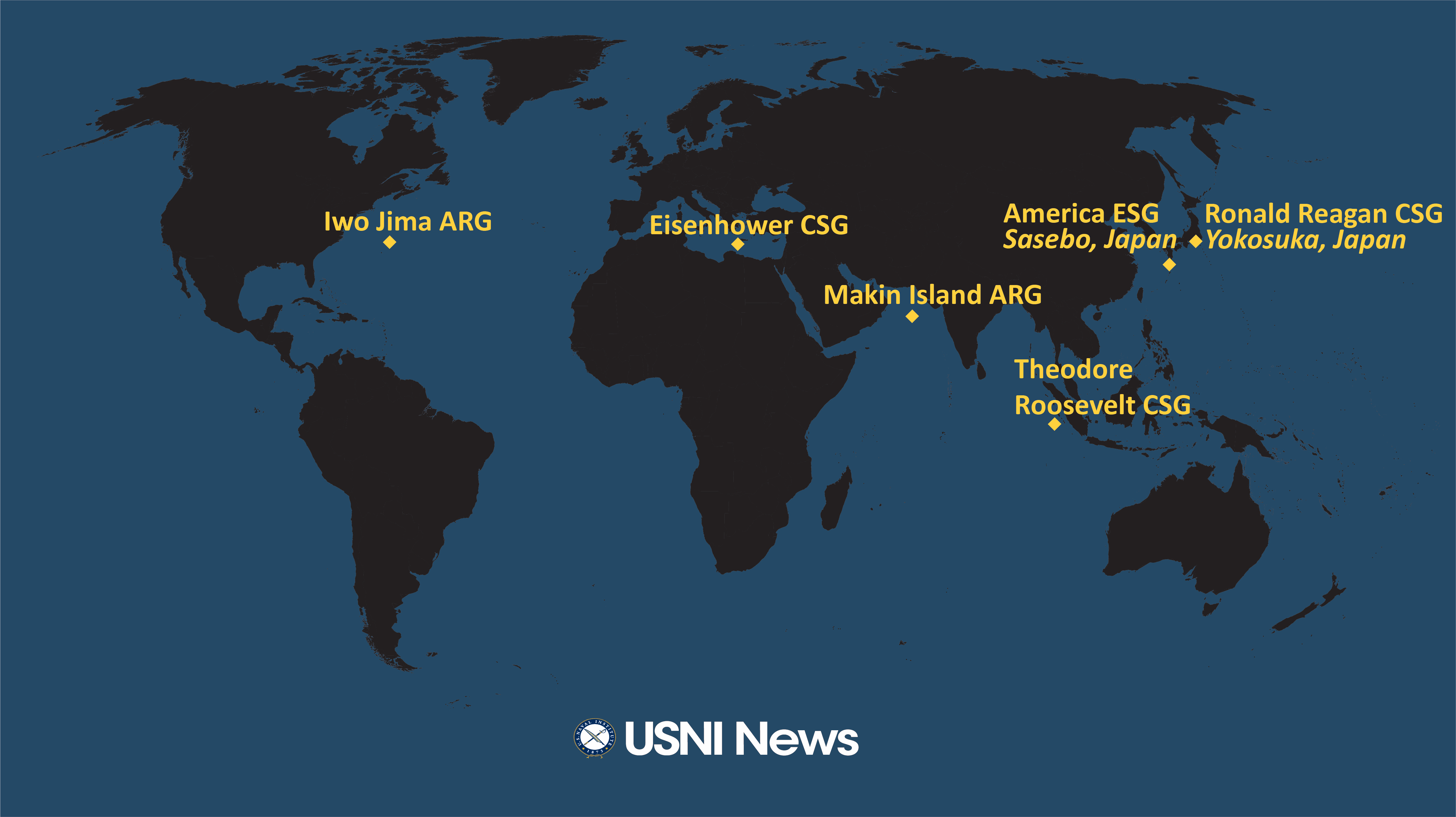 Until the US or NATO actually start moving forces east I think Defcon 5 is appropriate. That's not to say Russia isn't going to invade Ukraine or counter invade if Ukraine launches a a major offensive against the rebels or Crimea. This site has always been about nuclear threats to the US and her allies. The Ukraine is not one at the moment. Right now, all the "unwavering support" and "have Ukraines back", etc is just flowering diplomatic talk. Even Bidens conversation only promised to further help build up Ukraine's defenses.

If the US was thinking of intervening the on call brigade from the 82nd Airborne and/or Stryker Brigades would already be moving. Those sort of movements can't be hidden. Same goes for the Ike group moving south through Suez yesterday. It was already in the eastern Med, as one of the most readily available assets it wouldn't have done that if the US was thinking about intervening. Keeping it the eastern Med would have made sense as a deterrent but no its in the Red sea heading south.
B

I think that until some russian or belerus troops are not directly involved in Ukranins territory, the defcon level 4 may be excessive. But the information are too low and apparently the are no developments sinxe yesterday. So, probably nothing is going to happen.

Kushan said:
This site has always been about nuclear threats to the US and her allies.
Click to expand...

We have since shifted our scope to include nuclear threats world-wide.

bartok said:
no developments sinxe yesterday. So, probably nothing is going to happen.
Click to expand...

Yeah, it's amazing how everyone was ready for the nukes to fly on Friday, but everyone has moved on by Saturday.
K

DEFCON Warning System said:
We have since shifted our scope to include nuclear threats world-wide.
Click to expand...

In that case, While Russia has said they are willing to defend Crimea with nukes I think Ukraine would have to be on verge of taking it before that happens. As you've said in the other threads, the chances of Ukraine doing that are remote to say the least. They just don't have the forces to do it alone.
O

We confuse today with early 20th century.
Yes they both spooled up to catastrophic results.
The weapons of war then did exponentially increase the destruction of war but there was no risk of world ending destruction then.
The calculus that results in war between nuke powers isn’t the same. It isn’t even the same as it was in the 60’s or 80’s.
Just the interconnectedness of the world economy has changed all that.
“there just no profit in it” applies now more than ever.
All that doesn’t mean a nuclear exchange or conflagration is no longer possible. It more than likely happens either by “accident”, terrorist use, or one or more nuclear powers have their backs against the wall and believe they have nothing to lose. That would be threat of invasion, use of some other WMD, or coordinated massive infrastructure attack (destruction of the grid).
NATO suppling weapons and backing Ukraine publicly doesn’t rise to that.
The west created the opportunity for Russia to seize Crimea, and maybe there is some cultural precedent allows Russia to believe that. The whole of Eastern Europe has been a basket of bean bags that Western Europe Turkey and Russia have been fighting for a 300 years.
B52’s dropping guided mutations on known Russian troops is another.
We’re along way from that, Ukraine just isn’t worth it.
Ukrainians should be able to define their own way, God knows they’ve been denied that for basically forever.
neither east, the west, nor the south will allow that to happen.
N

No. NATO has gotten involved now. Biden admin has thrown their two cents in. Appears China visited Russia. The world is already involved. France and Germany have refused NATO entrance to ukraine. This is a very rapid fire situation. I think you're taking it too lightly.
B

France and German refusal of the Ukraine entrance into the NATO, I think that it something we have to consider in not so serious way. The Ukranian leadership is moving toward NATO and, if nothing else stops this process, Ukraine will finally enter NATO. In other words, if Ukraine will not enter NATO, it will not be thanks to France or Germany, but for Russia. I suppose that Russia will finally prevent this by hook or by crook.

But the fact that nothing new is happening, makes me think that no one want be the first to go "hard".
A

I don't know why he is calm like that, must be a reason.
But this is the most serious situation that has occured ever.

Chineese troops enter Myanmar, Chinese carriers are near Japan,
US carriers are in the Black Sea and the South China sea facing off with China's vessels.
Russia has sent 250,000 additional troops from the east towards the west, there are russian tanks on the border of the Baltic States, Poland and on the whole border of Ukraine.

Sources are all over the internet...

It's now only a matter of hours or days until the freaking WW3 starts.
My advice is something between Defcon 2 and 3.

Prepare your bags, shelter or even try to leave the cities and other areas near primary targets.
Fallout can be deadly in around 150 miles around them.

And which I often ask myself is: How can we get radiation readings from this website after the EMP?
Even if his servers aren't affected, our computers,the Internet and the powerlines, power plants are destroyed
and all electronics too. It's impossible.
B

I post here 3 video that had been aried in Russia about 5 hears ago, when Defcon Warning System was 3.

Unfortunately the translation is in Italian and I don't know if there are these video in English, but they are very interesting, because maybe they come back topical today.

The first 2 are intended to dissuade the russian public opinion oriented in favour of a war.

The last, is intended to send a warning to west, that the war can arrive.