Satellite Images Show That Chinese Navy Is Expanding Overseas Base

China’s navy, formally known as the People’s Liberation Army Navy (PLAN), has become more active in the Indian Ocean and Middle East. A cornerstone of its increasing reach is an overseas naval base in Djibouti on the Horn of Africa. Recent satellite images indicate that China is continuing work at the fortified Support Base there.

The images show that the pier is now substantially complete, so it should be able to accept ships soon. One image from March this year has been shared on Twitter by user @detresfa_, an open-source intelligence analyst. It shows an excavator working on the reclaimed land, a small but telling detail. Analysis suggests that this may be the start of a new quay or second large pier, significantly increasing the capacity of the base.

The base, China’s first overseas, was opened in 2017 but the piers are still under construction. The base is substantial with a well laid-out interior and large helicopter apron. There is no sign of protective tunnels for the ships, unlike some bases in China, but it is undoubtedly intended to be defendable. The outer perimeter is fortified like a modern-day castle with steep berms topped by towers and two rows of walls. There are even battlements.

Major work on a 1,120-foot pier appears to have been finished late last year. This is just long enough to accommodate China’s new aircraft carriers, assault carriers or other large warships. It could easily accommodate four of China’s nuclear powered attack submarines if required. But it is still relatively limited so it seems natural that China would look to increase the piers. The new activity may point to a second quay or pier near the first.

Djibouti is a strategic port on the mouth of the Red Sea with easy access to the Arabian Sea, Persian Gulf and Indian Ocean. Many vessels involved in anti-piracy and tanker protection missions stop there. China itself has been involved in these operations, and a Chinese tanker was briefly seized by Iran on April 14. The two countries have warm relations and the seizure appears to have been a mistake. The vessel was quickly released. 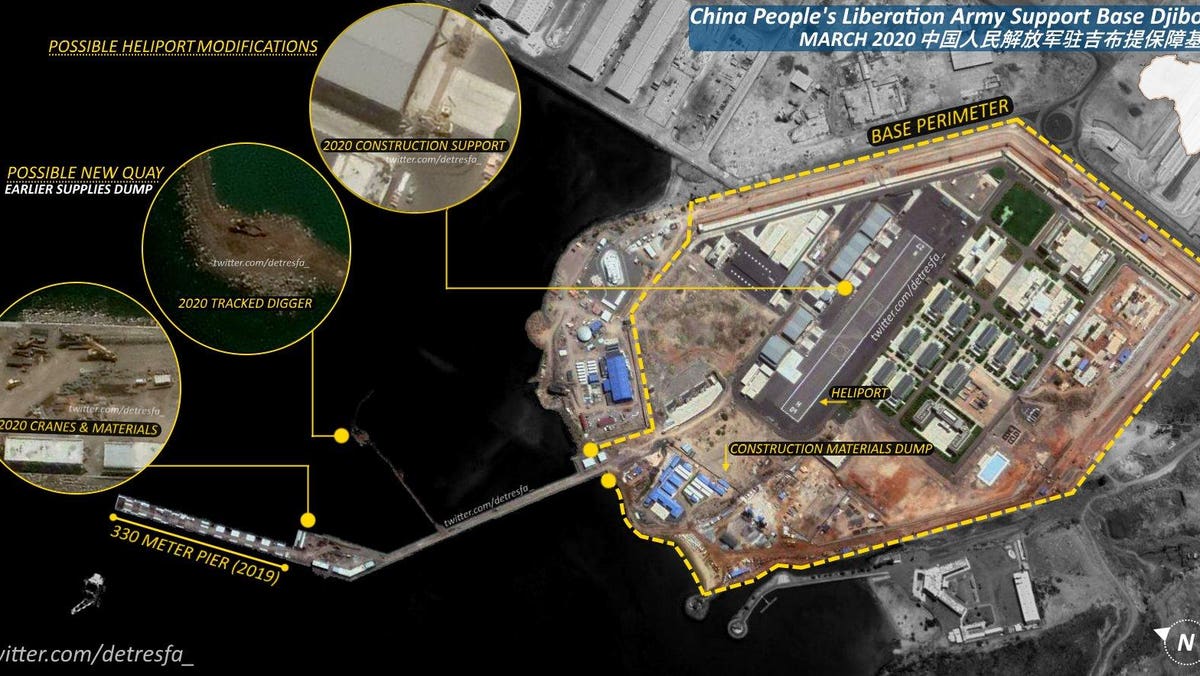 Satellite Images Show That Chinese Navy Is Expanding Overseas Base

A cornerstone of the Chinese Navy's increasing global reach will be a naval base in Djibouti. Recent satellite images point to extensive work on the piers and, possibly, a second pier or quay under constriction.