'Honestly, they're all going to die' What Russian soldiers who have already fought in Ukraine think about Putin's mobilization effort​ 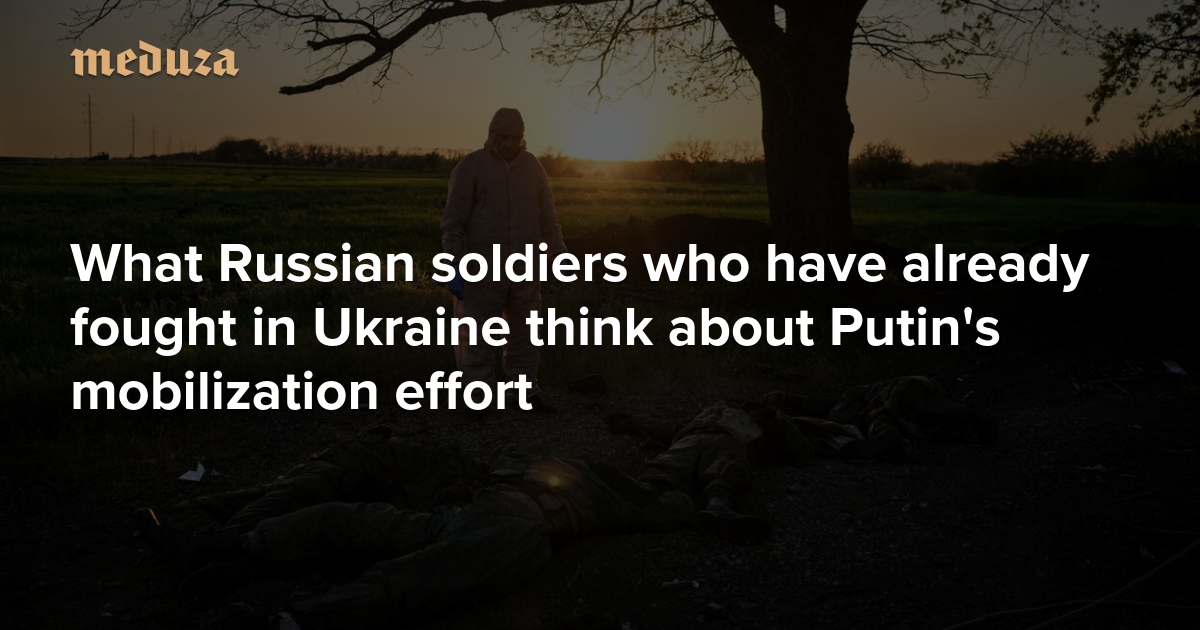 'Honestly, they're all going to die' What Russian soldiers who have already fought in Ukraine think about Putin's mobilization effort — Meduza

Russia’s mobilization campaign has been going on for roughly a week now. Some new conscripts have already been sent to the front without any training whatsoever; others are sleeping on the ground in barracks that look more like prison cells. Many have been forced to purchase basic medical supplies and uniforms on their own dime, and in some cases, draftees have been issued rust-covered weapons. Meduza asked Russians who have already taken part in the country’s war against Ukraine — as contract soldiers and mercenaries — to tell us what they think of the mobilization effort.

The names in this story have been changed.
Click to expand...

If I’m being honest, they’re all going to die there. They'll be mutilated and killed. This isn’t a trained army! I, for example, served [as a contract soldier] for a long time, then chose to go [to the front in Ukraine] myself — and I still found myself unprepared. The very first day, I realized I had made the biggest mistake of my life.

When I decided to go to Ukraine, I was a staunch patriot. I believed there were Nazi formations of some kind there, like the Right Sector, the Aidar [Battalion], the Azov [Battalion]. Plus I’d watched a bunch of [Russian] films like Soltsepyok and Opolchenochka. Plus, all of the Telegram and TV channels were designed to pump [that stuff into] our brains.

But even while we were still being driven across the border in the Ural [truck], I realized that we were the occupiers, we were the fascists. I [...] was sitting in the truck bed, watching the scenes going by. What we were leaving behind. All of those destroyed villages in Kharkiv. I realized we were actually destroying a country. Along with its civilian population.

You’d go through a village and children would run out onto the road and gesture after you: either “smoke” or “eat.” I just couldn’t wrap my head around it. The world was upside down; I felt empty inside. You realize all of your life so far was fiction. A soap bubble.

We traveled like that to Izium [in the Kharkiv region]. I spent three days on the frontline — and got another wake-up call when our own artillery fired at us. Then those stupid commands began…

I’ve served more than a few times, and I can tell when I’m being sent in for slaughter. And I immediately told this guy with big epaulets to fuck off: “I’m not just a bargaining chip! I’m a soldier for the Russian army! You can’t just throw me under the bus like this!” To which he answered, “You’re all just cannon fodder. You’re the third group of people to form this battalion. Do you know where the first two groups died? And you’ll die here.” Then he told my commander, “Send in the meat." [Us.]

They were trying to advance, and they threw us at a Ukrainian stronghold, where tanks, artillery, and machine guns were all operating. And the Ukrainians had hundreds of troops, while we only had 40.

You wake up as one person, and by the evening, you’ve become someone else. You go through such intense metamorphoses that it scares you. It scares you how blind you were below. And deaf.
I lay in a trench for two or three days — and left in the first vehicle I saw. I jumped into the first vehicle that left our positions to get food and munitions. At first, they said, “We don’t take refusers,” but I told them, “I have a gun, so you’ll take me one way or another.”

This is a scary time: 1922–1939 is starting all over again, 100 years later. And I really want to tell [the new conscripts] that they should all come back — however many there are — and turn towards Moscow.

Even when I’ve tried to explain things to people, they haven’t listened. Nobody believes words, you see? I was like that, too — and there was a time when people who had already been to Ukraine tried to talk me out of it. They called me right from the front lines and told me not to even think about it.
When I look at [the people being mobilized now], I see myself three months ago. But I don’t have any sympathy for them. If you have a choice, choose life! Sure, it might be life in prison; sure, the state will consider you a criminal — for you’ll know you’re not a criminal. You won’t kill anybody. You won’t shoot anybody.

I got a summons the other day. I immediately called the military commissar and told him where he could go. He took offense: “Why are you talking to me like that?” Well, how am I supposed to talk to you, comrade colonel? I did six months there [in Ukraine as part of the Wagner PMC]. Are you kidding me with this?

“We didn’t know you’d just returned from there!” Well, of course [Wagner] didn’t share that information — officially, it was as if we weren’t even there.

And the military commissar knows perfectly well who it was mouthing off at hiim — I introduced myself and everything. He said, “Well, come on over, we’ll get it sorted out.” There’s no way I’m going there — I understand perfectly well that I’ll be put in handcuffs, stick me on a train, and send me far away.

A bunch of newly-mobilized guys have already called me: “What do I do? Where should I go?” Go on, I tell them, serve. I told them what boots to buy and how to behave themselves there.
Some of my friends have recently had children — theoretically, those people can’t be conscripted. But they’re conscripting them anyway. People are clutching their head; they don’t know what to do. A lot of people have loans and mortgages — who’s going to pay them now?

I don’t understand what this crowd of people is going to achieve. If we, the professionals, got our asses whipped out there, what do they think they’re going to do? The best case scenario is that they stay in the reserves [in the Donbas]. The worst is that they die a hero’s death. Two options.

Especially if they get thrown out there after a week of training. A week — that’s nothing at all! Combat units need at least a month to a month and a half for unit cohesion.

These [newly drafted] IT guys and other cannon fodder — what are they going to do? They won’t change anything [at the front] and they won’t solve anything. A friend of mine had a son that served for a year — and he got a summons, too. He didn’t so much as smell gunpowder — he may have fired a weapon twice throughout his whole service. So what are they sending him for? What’s going to happen to him? I just don’t get it. I can’t wrap my head around it.

So why recruit these 300,000? I think there’s going to be a total standoff: NATO against Russia. I hope they don’t throw these conscripts to the front immediately and instead spend some time training them. So that there’s a reserve that’s ready for battle. And then [if there’s a direct confrontation with NATO] they’d be ready as soon as the command was given.

Everyone’s scared. I’m scared, too, to be honest. Something bad is coming at full force — I can sense it.

Yes as usual with any war anywhere there are different perspectives from different people. And all fighting on the same side. Or should I say both sides. This is the norm. Individuals are exactly that and can be similar to the point of grouping. All the vets I have met and spoken with have different opinions of their service in previous wars and that is how it will always be.


DEFCON Warning System said:
You can’t just throw me under the bus like this!” To which he answered, “You’re all just cannon fodder. You’re the third group of people to form this battalion. Do you know where the first two groups died? And you’ll die here.” Then he told my commander, “Send in the meat." [Us.]
Click to expand...

This even brought tears to my eyes. Well done!


This even brought tears to my eyes. Well done!
Click to expand...